Stories on the wall

A cosmos made of broken plate pieces, a deep sea of ocean blue paint and the twinkling shards of shattered kitchenware may seem like random items to the average eye. But, to Francisco Chavez Silva they are storytelling tools.

Chavez Silva is 63. He is an artist based in Austin and has organized a variety of initiatives throughout the city that provide immigrants with opportunities to tell their story and participate in artistic occupational therapy. One of his first projects was a mural at Casa Marianella, a sanctuary home for migrants, immigrants and refugees.

Miriam Fiorentino, an assistant director with the organization, explained the mural is part of the spirit of the house.

“The mural is part of a larger atmosphere of Casa,” Fiorentino said. “We are brightly colored and we are a very joyful place and very community centered. Hospitality is one of our core values, along with dignity and respect for all people.”

For the immigrants arriving at Casa Marianella, the mural is an artistic outlet and an image of hope and welcome homecoming to a new country.

Maria Obregon, one of the organization’s new residents, just arrived from Mexico. After her husband died, she left her two starving children alone to find work in the U.S. so she could send them money. The mural was one of the first images she remembers seeing in the U.S.

“I started to like it and now every afternoon I sit and observe it, analyzing its elements,” Obregon said. “It brings me joy.”

The idea for the mural was born in 2013 when Chavez Silva began spending more time at the Casa. He was inspired to volunteer more often by his late friend Macario, who he met at an alebrije art workshop at the Emma Barrientos Mexican American Cultural Center. He realized he wanted to do more for the immigrant residents after hearing their stories, so he decided to combine his lifelong passions- art and social activism.

Chavez Silva was never a resident of Casa Marianella, but he identifies as a second generation immigrant. His parents immigrated to Mexico and Chavez Silva followed suit as an adult and immigrated with his family to the United States.

Chavez Silva says he was forced to leave his home and bring his family to Texas after being economically discriminated in his workplace. With no job, little plans and a 3 month tourist visa, they arrived at his wife’s family home in Austin 25 years ago, where they would remain as undocumented immigrants for the next decade.

While his situation in the United States improved economically, he still struggles with other aspects of his family life. “I gained economic stability but I lost a lot morally,” Chavez Silva said. “I lost my children a little. We feel a distancing, especially with my son who has problems with alcohol addiction.”

Still, Chavez Silva says he’s found his mission. Telling the stories and struggles of immigrants in the community is a labor of love, as is providing them with opportunities for artistic expression of their experiences. The Casa Marianella Mural is a big part of that. Chavez Silva says while he directed the effort, the project was a group effort and represents everyone. For the mural, he said he provided the blank canvas and the residents created something that had a little bit of everyone.

Sofia Herrera, a longtime volunteer at Casa Marianella, said every country has their grain of sand.

“It represents those from Guatemala, it is art for them,” Herrera said. “For the Haitians too. And it also has special art for those of El Salvador, Honduras, Cuba, and a variety of countries.”

While Chavez Silva is not retired, he does have a little more free time at this stage in his career. Time that he says he gladly dedicates to his art, filling every moment with a new project dedicated to his fellow immigrants.

“I think the Convivencia here, my free time spent creating community here at Marianella, is a very big opportunity on a human aspect,” Chavez Silva said. 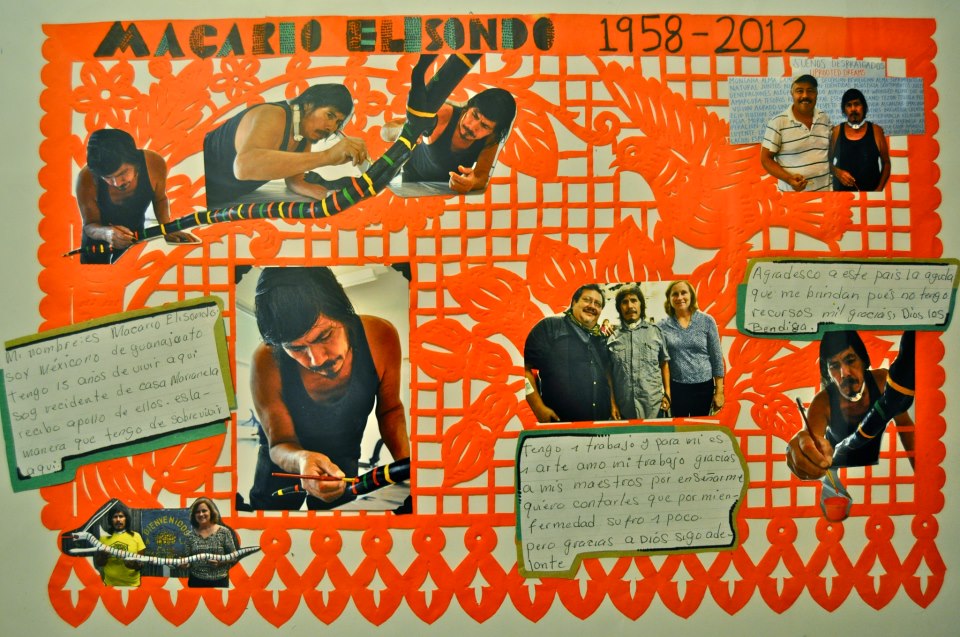 A photo memoir for Francisco Chavez Silva’s late friend and inspiration Macario, with whom he collaborated on art projects at Casa Marianella. 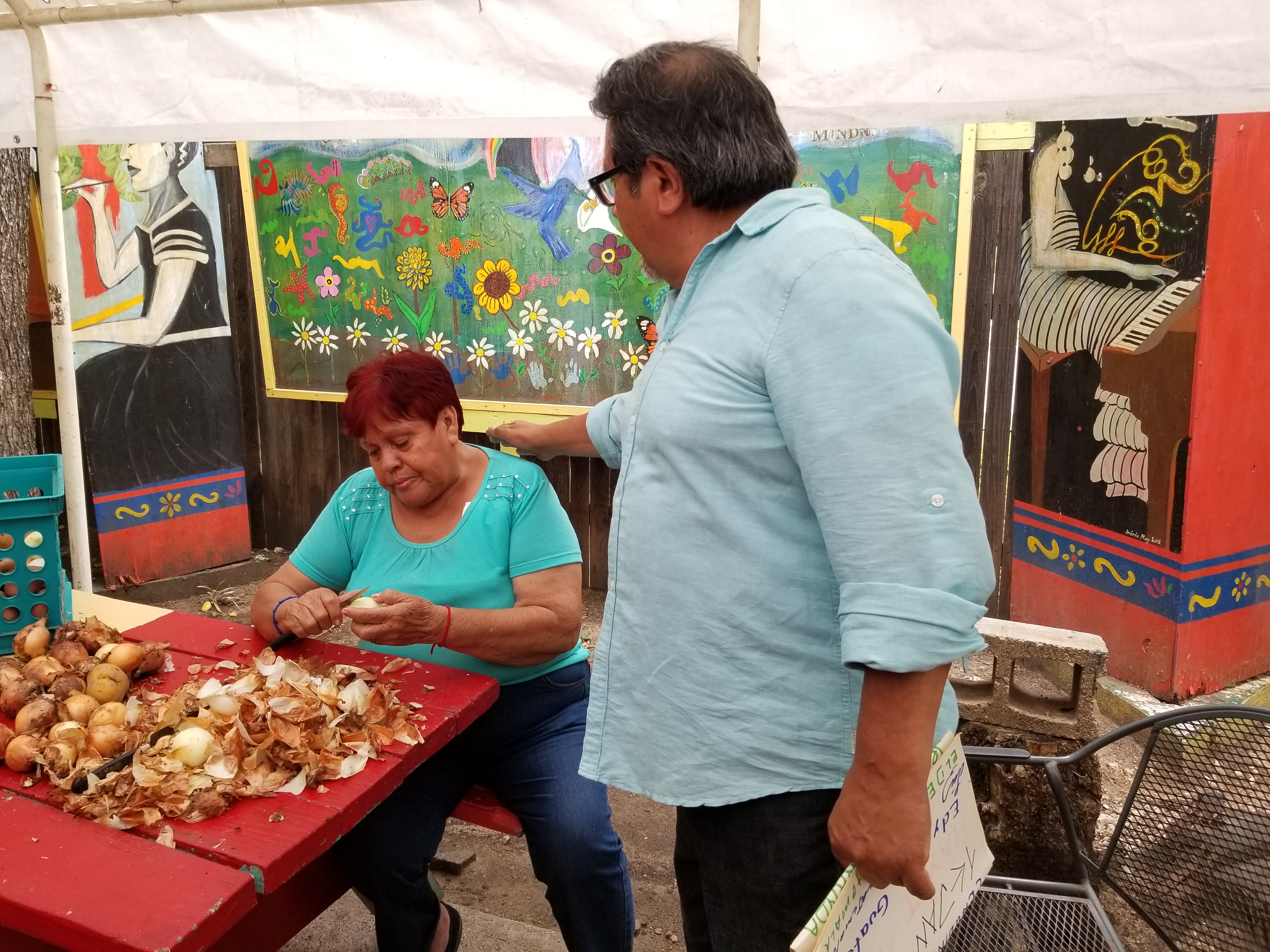 Francisco Chavez Silva comforts an immigrant woman at Casa Marianella as she tells him her story. 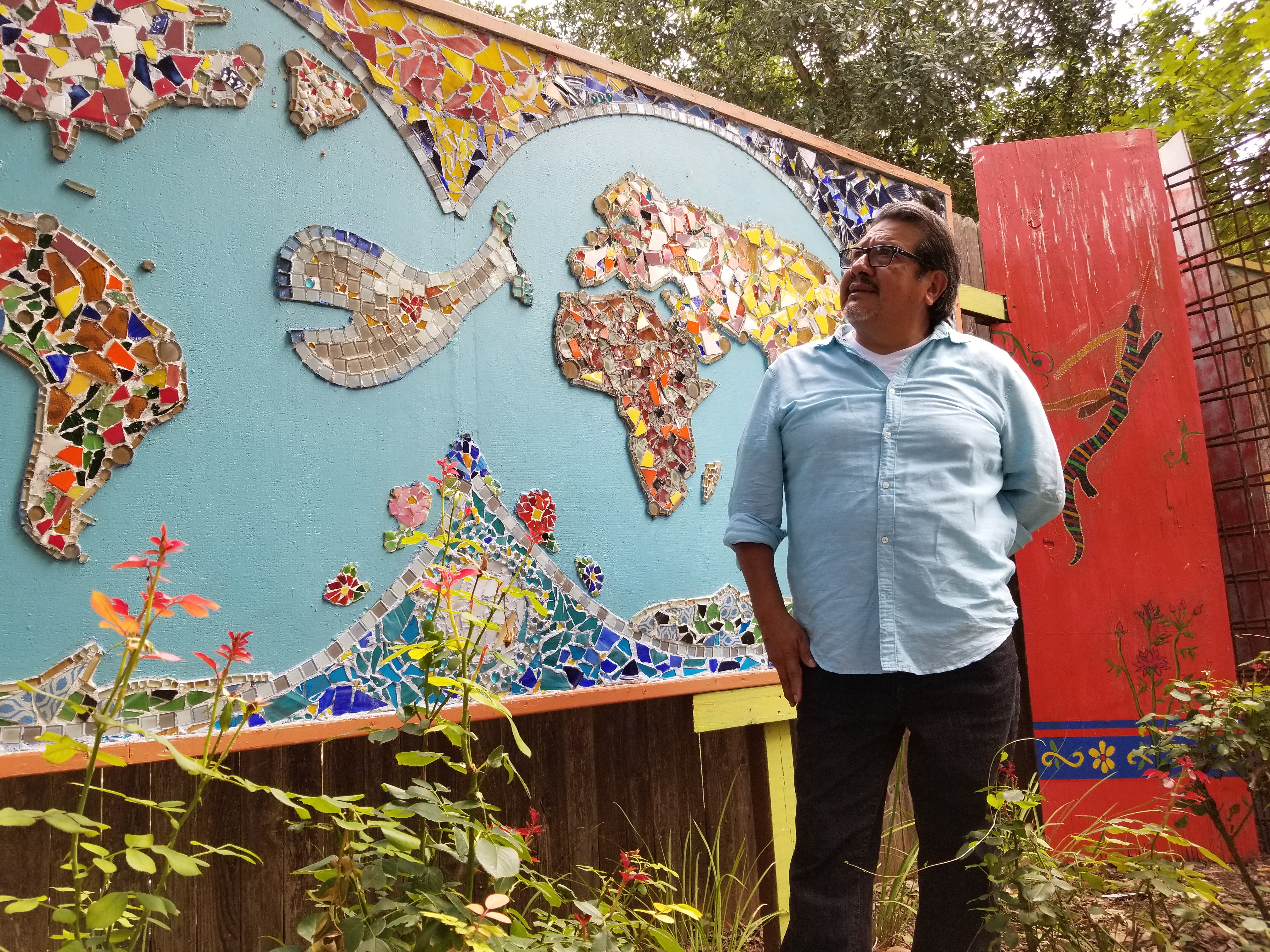