Retiree finds a family through dance, one step at a time

Every Tuesday afternoon at the Lamar Senior Activity Center, you can hear the gentle sound of feet shuffling and tapping across the floor as the line dance class begins. In a simple, fluorescent-lit classroom at the back of the center, students aged 50 through 91 are navigating the transition from a grapevine into a twinkle step. The dancers are not in perfect sync, but there’s a smile on everyone’s face.

At the front of the class is Linda Fugate, 62, the substitute instructor who has been line dancing for four years. As she teaches a class of fellow seniors, she keeps the energy up, encouraging everyone to pick up the pace as “Waltz Across Texas” begins to play.

When Fugate moved to Austin in 1985, she was leaving behind her family and her home in Tennessee. She studied physics at the University of Texas, and after retiring from her job in industrial research, she’s found a new community through dance. Whether it’s freestyle dancing among the crowds at the popular lakeside restaurant The Oasis or in the middle of a line dance at a Texas jamboree, Fugate discovered people who were just as passionate as she was.

“Line dance is a wonderful way to socialize with people,” Fugate says. “Some of my best friends are line dancers. I don’t have any family in Texas, so the line dance community is part of my local Texas family.”

George Weinberger, 71, is a class regular. He has been dancing for decades and met Fugate when they both got into line dancing. For the two of them, dancing was a lifelong hobby, but it was also a way to stay active in the local community.

“[Our dance group] would put on performances at nursing homes and it’s very rewarding to see some people who would hardly move at all–possibly in their wheelchairs–dance,” Weinberger says. “You could see the music break through to them and actually see movement and interest.”

At the senior center, site supervisor Jerilyn Rainosek says they’re currently experiencing their highest enrollment over the past few years. About 900 to 1,000 seniors participate in programs at the center — from art to Zumba. But Rainosek says the programs geared toward physical activity are typically the most popular.

“It [provides] a lot of socialization and just a lot of camaraderie, which leads to more health benefits all around.”

Ever since the senior center opened in 1978, the line dancing class has been a staple. But four years ago, after the original instructor could no longer teach the class, the center was determined to find a replacement.

“I think this was some people’s home base and that’s what they wanted, so we just kept at it,” Rainosek says. “They would travel to the other centers and try them out and then still come and tell me, ‘I need to get a line dance class.’ They wouldn’t let up.”

Eventually, local dance instructor Connie Shell volunteered her services in 2014 and quickly recruited her friend Fugate to assist her. Since then, Fugate has acted as substitute teacher whenever Shell is out of town.

“When I came here I thought, ‘Maybe someday I’ll teach,’ but no big hurry about that,” Fugate says. “But after I thought about it, I said ‘Well, okay. Why not? You never know until you get in there and try it.’”

As part of the line dance community, Fugatean gets her music from a list voted on by fellow teachers. She’s always finding new dances to bring to class from local choreographers or YouTube.

Fugate gently pushes her students with each song, encouraging them to try slightly harder steps. It’s all part of their preparation for their next big event: The Texas Line Dance Jamboree in Waco in October.

For Fugate and many of her students, a love of dance is what got them here, but the friends they’ve made while dancing has kept them coming back.

“I have a lot of great memories of dancing both here and going to the out-of-town events,” Fugate says. “I’ve met a lot of wonderful people and I really enjoy the social aspect just as much as I do the dancing. There’s just a whole bunch of people that you see in line dance and they’re happy and they have common interests, so it’s a wonderful community of dancers.” 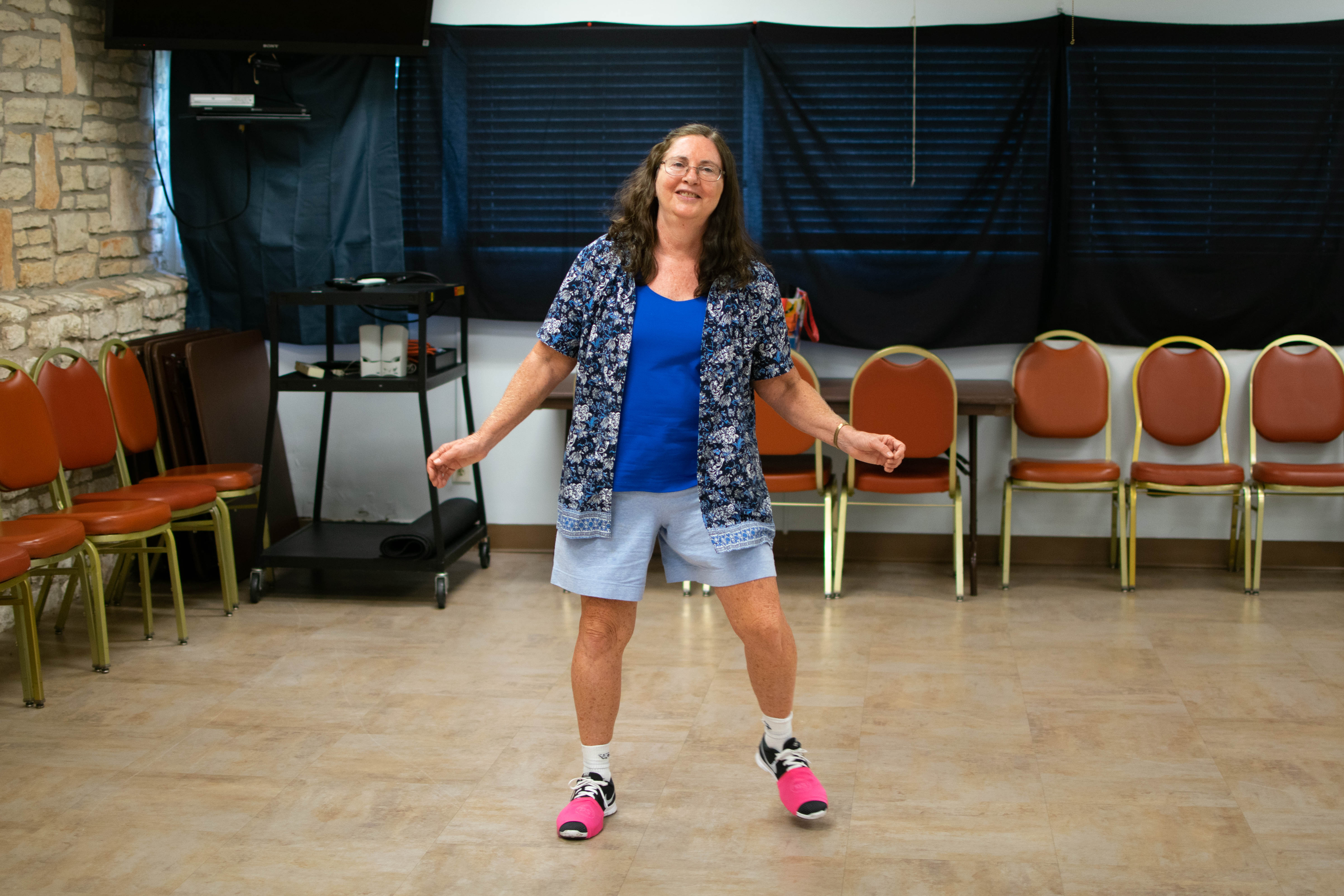 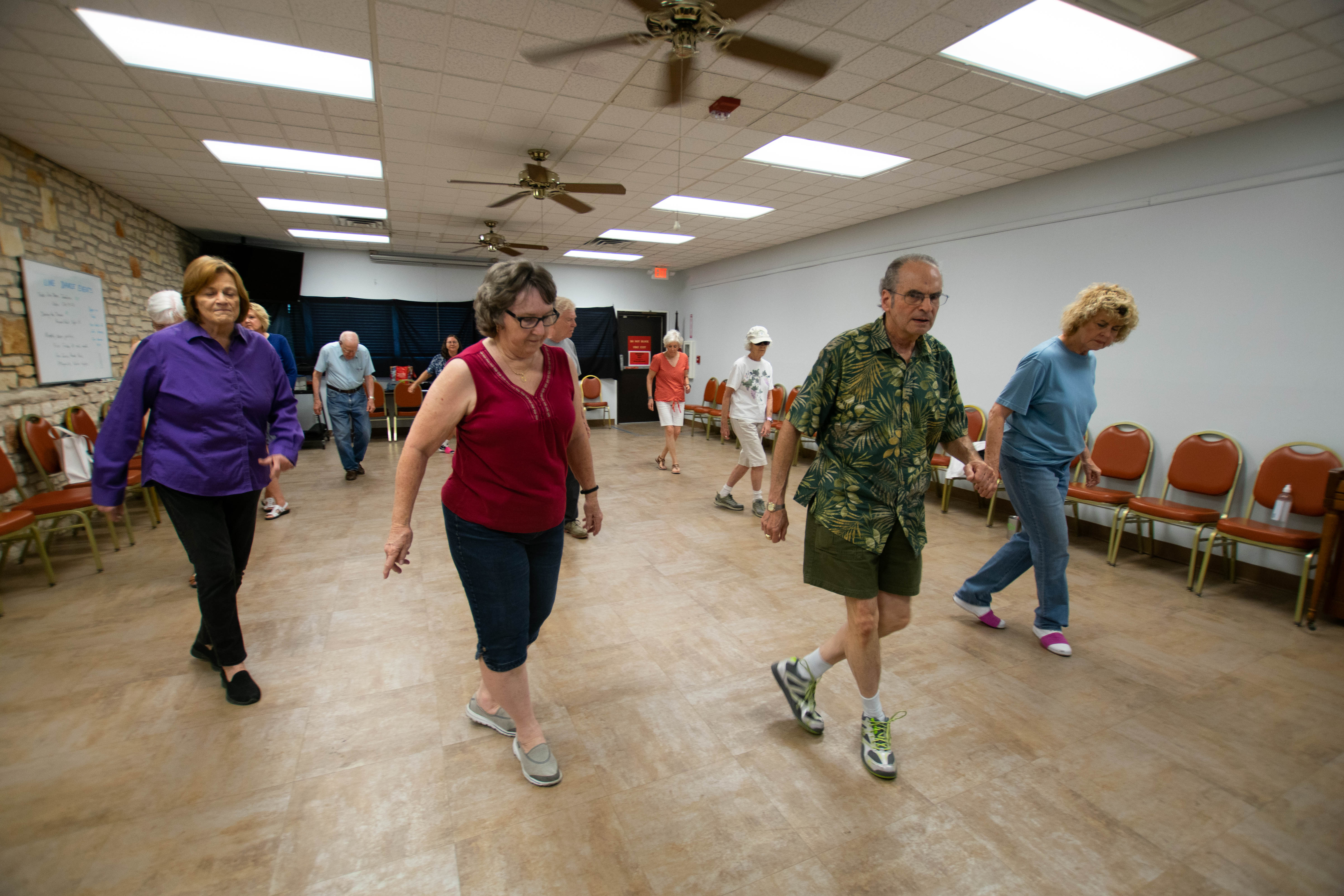 The line dance class has been one of the most popular classes since the Lamar Senior Activity Center opened in 1978. 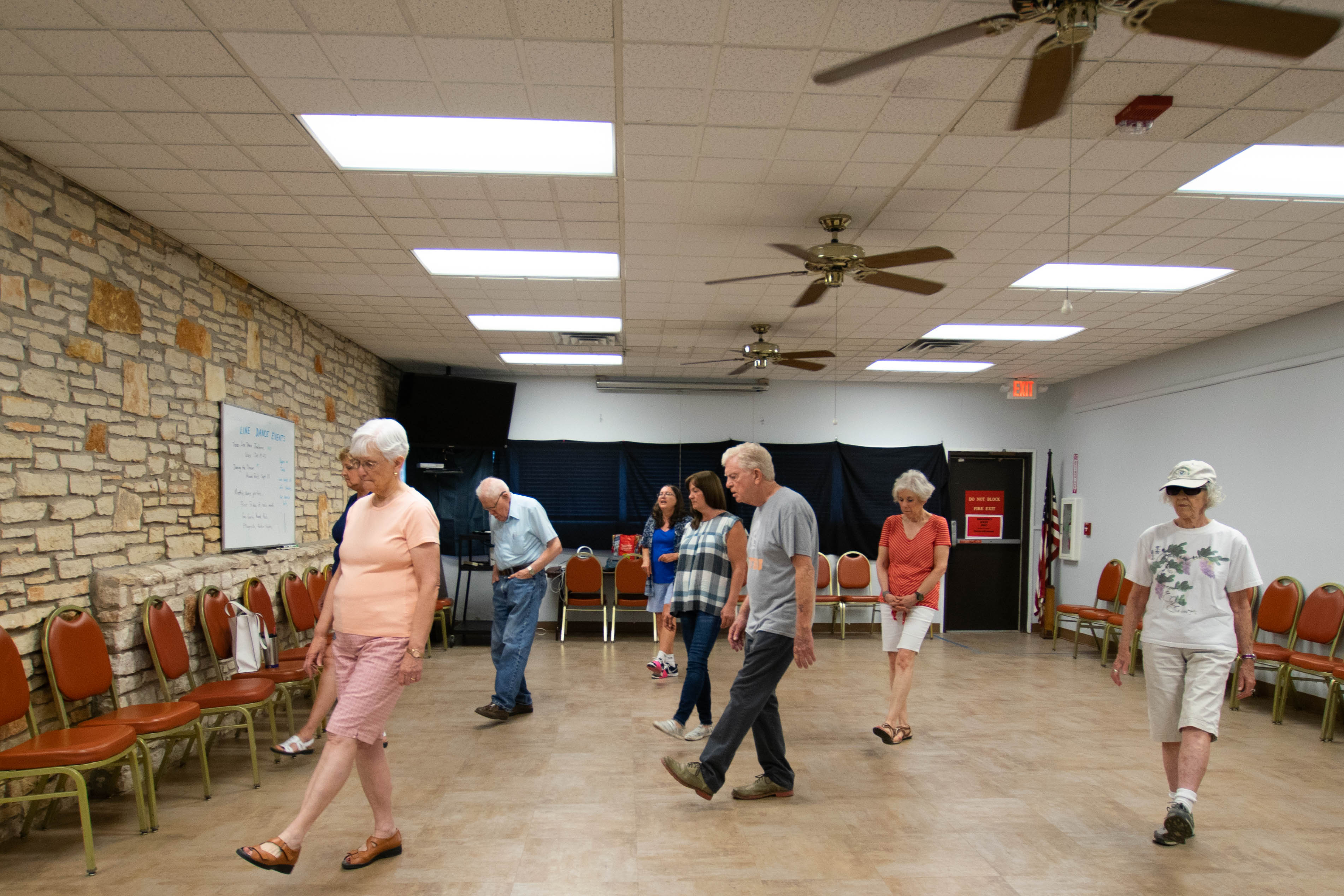 Students run through steps during a line dancing class at the Lamar Senior Activity Center.