Kate Hellenbrand of Austin, Texas is one of the first female tattoo artists in America, gaining the title of America’s Godmother of Tattooing. At the age of 75, she has been tattooing worldwide since 1971. While traveling around the world, she has tattooed approximately 50,000 people.

Hellenbrand adopted the nickname Shanghai Kate in the mid-1990’s. It was given to her by tattoo artist Jack Rudy, with whom she worked at Tattoo Land, now called Tattoo Nation, in East Los Angeles, CA.

“I have an innate ability to ‘shanghai’ people, which means I know how to get people to do things for me for free,” says Hellenbrand. “Also, I’ve worked in different Chinatowns in New York, Philadelphia, Honolulu, Los Angeles, San Francisco. Chinese landlords would rent to tattoo artists back in the day, Occidental landlords would not. So, the only places we could open tattoo shops was in Chinatown.”

Hellenbrand became a tattoo artist because of her love of tools. Growing up, her stepfather taught her everything about various tools such as saws, hammers and nails for constructing outbuildings on the farm where she grew up. She later applied this knowledge to the graphic design field before it was computerized. But, her introduction to the tattoo machine sparked a passion that would last a lifetime.

“Artwork doesn’t have the immediacy that I need in order to come to a degree of completion. You can put a piece of artwork down, walk away from it, and come back to it in two or three months and pick it up again. That does not really have any appeal to me,” says Hellenbrand. “Tattooing has a limited time frame, so I need to perform before that time frame has expired. I really need the energy exchange between me and my client.”

Despite her passion for her career, things have slowed down for this godmother. Hellenbrand has decided to tattoo periodically in order to share her knowledge. She currently considers her finest aspiration to be her duty to work as a lecturer, educator and mentor. Hellenbrand is also in the process of publishing a book documenting the history of the tattoo industry. Even though the art of tattooing has been around for many centuries, Hellenbrand is afraid it is known as “the art that art history forgot.” Making an archive of the history of tattooing has been difficult as she has received a lot of pushback from young tattooists — they say they do not need to learn the history of the industry. Hellenbrand says there is a lot of disrespect toward the elders of the profession and the art of tattooing.

“People feel entitled, people think they know everything when they know very little,” says Hellenbrand. “Tattooing has become sort of a hobby now for people. They think it’s legitimate if they go to eBay, or even Walmart or Sears and buy tattoo equipment. What’s happening with the advent of the (tattoo?) television programs is also horrific. People think they can be a star for the day if they have a hoard of followers and a hoard of friends and a hoard of fans that know nothing about this industry –– who know nothing about this craft,” says Hellenbrand, referring to reality shows about tattoo shops.

When Hellenbrand is judged on social media for her age, she tries not to take it personally.

“When people hurt me, they’re not hurting me as much as they’re hurting tattooing and the craft and the people who taught me,” says Hellenbrand.

Hellenbrand likes to tattoo when she has time, but the strength needed to complete a tattoo can be taxing on the body. She has recently broken her tailbone for the sixth time. Also, she is noticing signs of aging.

“The hands won’t hold up over time. The other sadness is the creeping of age in my eyes. My eyes don’t work quite as well as they once did. And the last thing I want to be is one of those kind of nostalgic pieces of someone. I sort of am that already where people want just my signature as my tattoo,” says Hellenbrand.

After paving the way for females in the tattoo industry, Shanghai Kate does not show signs of stopping completely as she continues to pursue her passion of tattooing and preserving the art she loves. As someone who helps create long-lasting memories with ink, she is determined to keep going as long as she can. 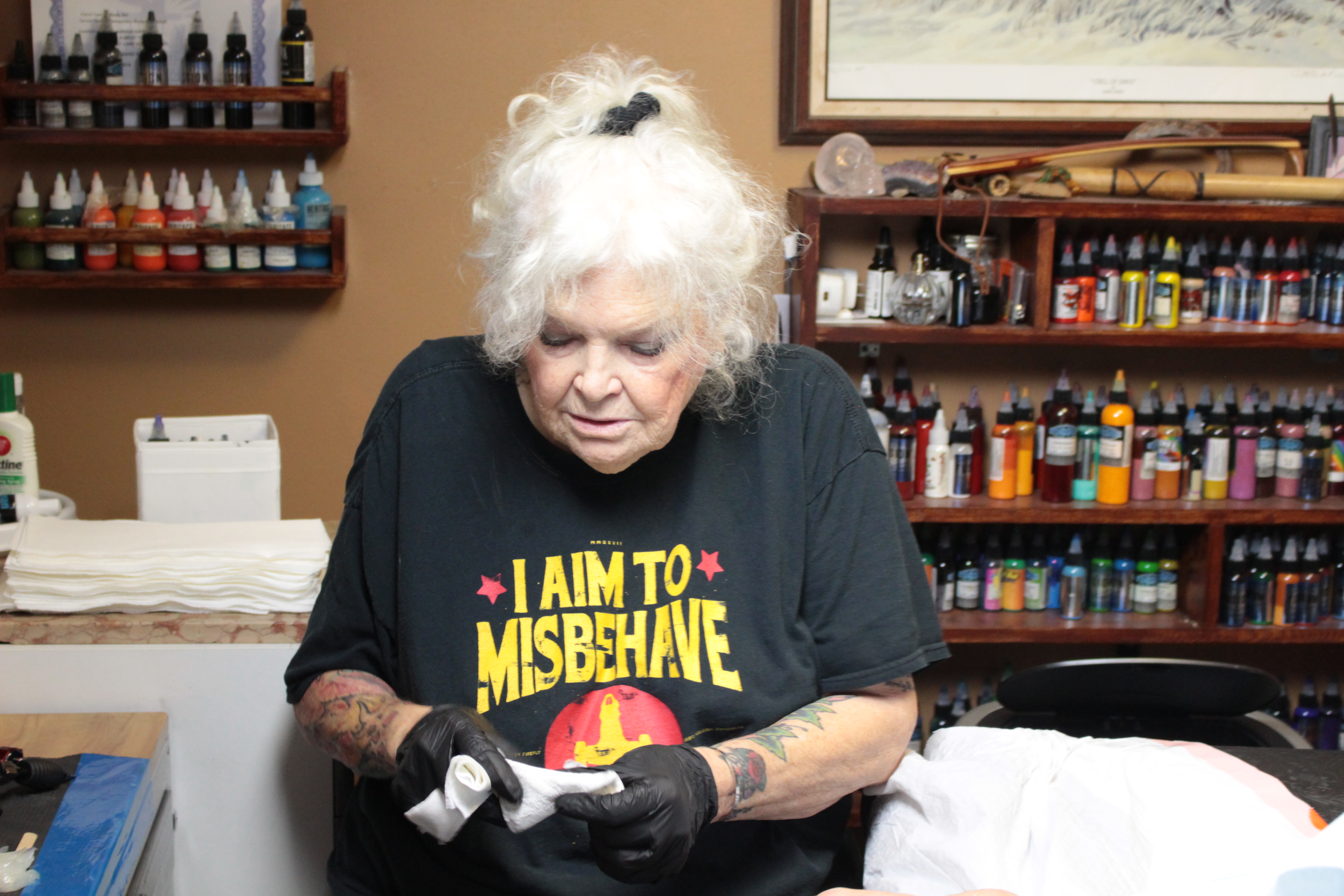 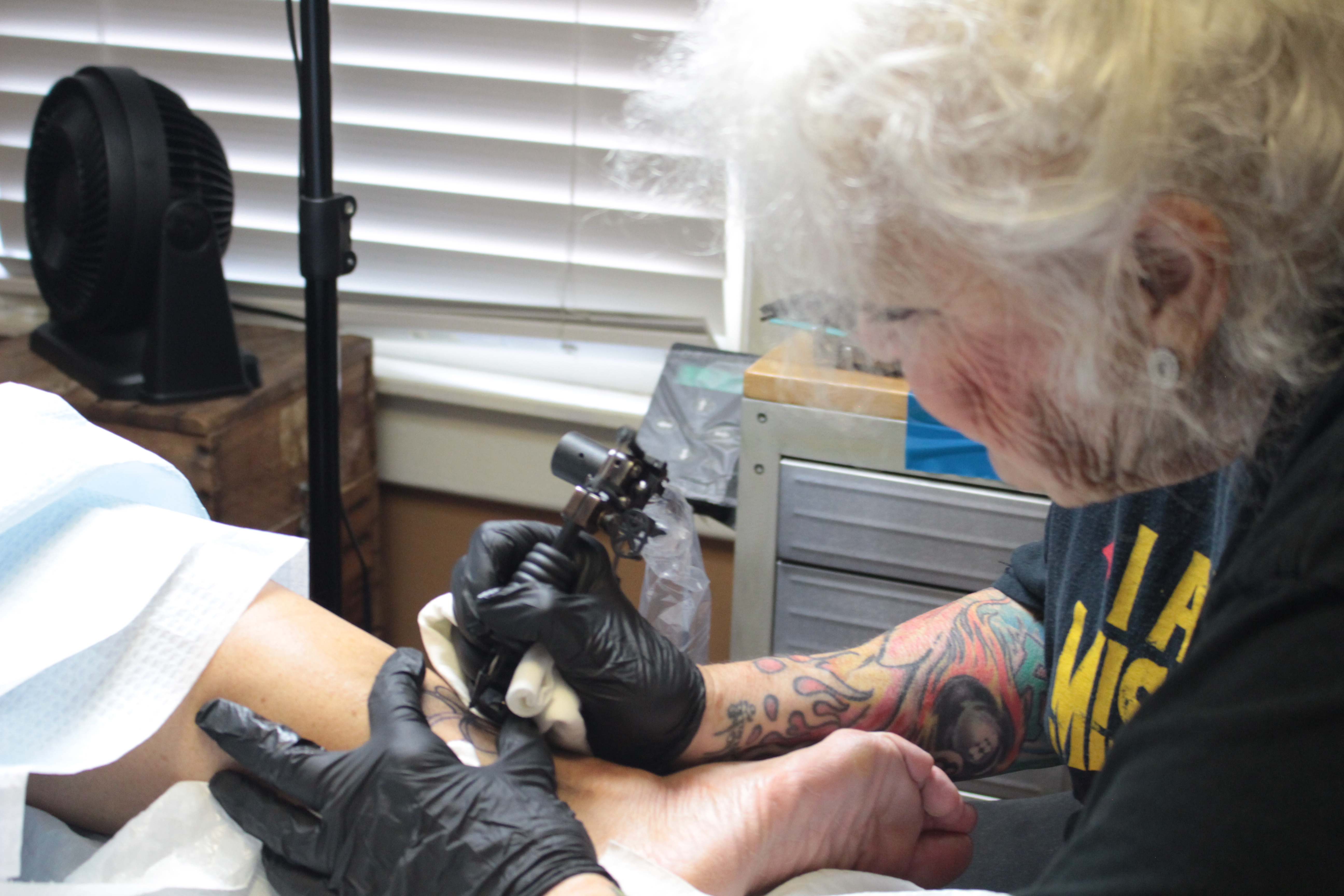 Shanghai Kate Hellenbrand, 75-year-old tattoo artist, tattoos Next Generation Radio editor Traci Tong. Hellenbrand uses one tool to draw an outline of a flower, and another smaller tool to fillet in with color. 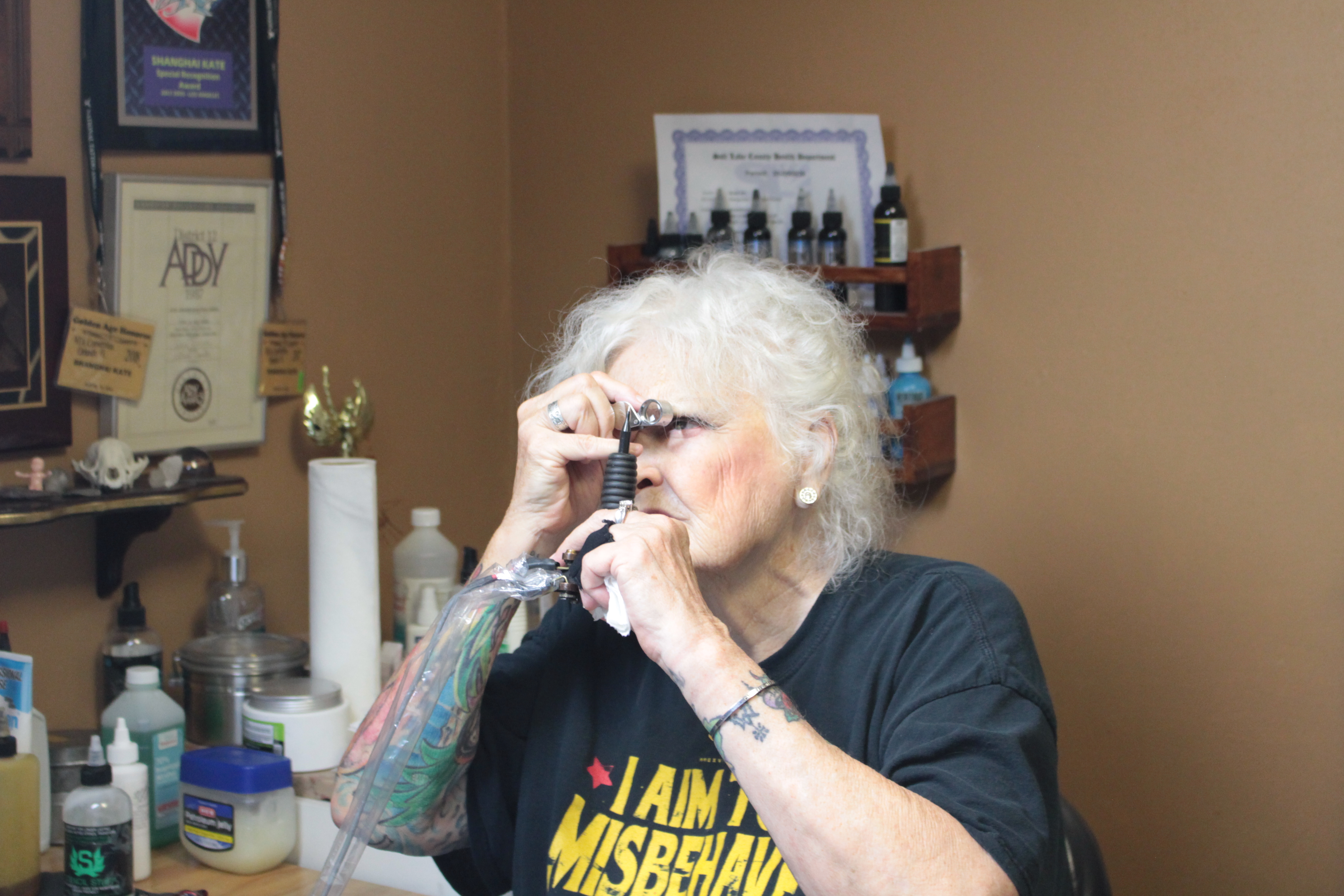 Shanghai Kate Hellenbrand, 75-year-old tattoo artist looks through an eyeglass at a tattoo machine before she begins tattooing.